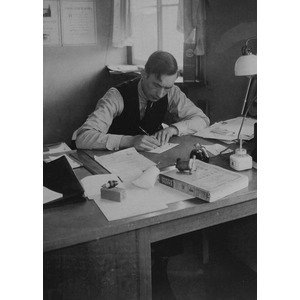 Already as a boy growing up in Gothenburg people paid notice to Hjalmar Thoresson’s artistic abilites, and thanks to his mother he was as a teenager hired at a local printing house. In the late 1920s he relocated to Stockholm where he worked for the Swedish printing and graphic giant Sveriges Litografiska Tryckerier (SLT, later Esselte). Thoresson was commissioned by major Swedish companies such as the State Railways, the Postal Company and Kooperativa Förbundet.