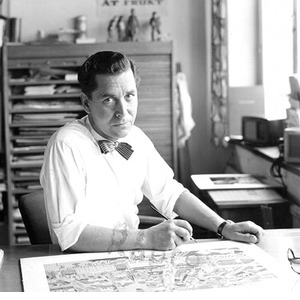 Gunnar Bergenholtz was born in Gothenburg, but early in his childhood the whole family moved to Stockholm. In Stockholm Gunnar dropped out of upper secondary school, because he knew that he wanted to draw and nothing else. He had artistically hertiage from his father, who was an artichect. Gunnar studied at Konstfack, the University of Art, Crafts and Design and then got employed by Wilhelm Beckman Propaganda. Later he moved on to Esselte Advertising. As most illustrators, Bergenholtz was aslo freelancing during the evenings and weekends, creating posters for Skansen and many other companies.

We're sorry, we don't yet have any posters by this artist in the shop.
But do let us know if you're interested!