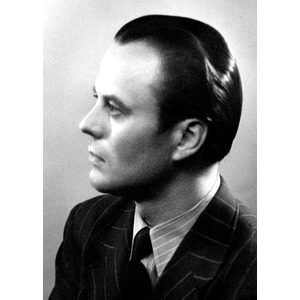 Erik Ölmebo studied arts at Konstfack in the 1930s and received an internship at the advertising agency SVEA in Stockholm in 1938. From now on he was totally dedicated to graphic works at different agencies in Sweden.

In 1950 Ölmebo participated in the ”Intra-European Cooperation for a Better Standard of Living” Poster Contest – the idea was to promote the Marshall Plan. At that time it was probably the largest poster contest ever organized with over 10 000 posters participating.

Ölmebos poster was by a jury chosen as the best from Sweden and 4th best internationally. The prize? 200 USD and a three week long trip to Paris and Rome!

Later on he became head of the atelier at the news agency Svenska Telegrambyrån, where he worked until 1972. On his free time Ölmebo was a dedicated painter, mainly painting Swedish, Danish and Spanish rural landscapes.