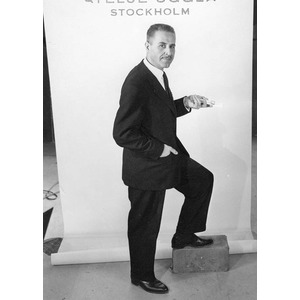 Albert Andersson went by the nickname Abbe and that’s also how he signed his work. He was born in Stockholm and worked as the art director for the Swedish Telegram Agency for many years. He was doing both advertising illustrations and photography, and during the later part of his career he started his own advertising company “Abbes Reklambyrå”. He was elected in to the SAFFT-association in the early 1950s.

When Andersson’s award-winning poster “Mermaid” was shown in 1952, it attracted international attention. The reputed German newspaper Graphik published Abbes poster on the cover, as well as using three spreads in the newspaper for his work. The title of the article was “Albert Andersson’s Smiling” and aimed at the playfulness and humor that characterizes his illustrations.

Albert was a man of details. While he was painting his famous Mermaid poster he wanted to make sure that the mermaids scale had the right look. So he hung a fish from the roof in the studio, and studied for many hours how the light fell on the scale. When the poster was sent in to the management for approval they demanded that he would change the color on the mermaids nipples: the bright read was too colorful and provoking. Abbe did a new version and used a paler color on the nipples, and this time the management approved of the poster. But before going to print he filled in the nipples with the original, bright red. Abbe knew what he wanted and wasn’t willing to compromise on his art.

We're sorry, we don't yet have any posters by this artist in the shop.
But do let us know if you're interested!